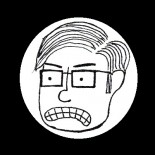 It’s near midnight on Easter Sunday, and I’ve been up since 5:45AM, so I don’t think this will be the most coherent post I ever make.  At this point I’m pretty sure it will rate among the least coherent, and people will find it later in life, and I will have to defend my religious position even more than I currently do (granted, I don’t *have* to defend it these days so much as I “like to argue”).  I have no documents in front of me, I did not go through my King James Bible, nor the Kindle edition of Mere Christianity I downloaded recently and have yet to read, nor any of the G.K. Chesterton collections I have downloaded and read, nor the last few pages of Brideshead Revisited nor my copy of T.S. Eliot’s Four Quartets nor Monty Python’s Life of Brian nor Christopher Moore’s The Gospel According to Biff, Christ’s Childhood Pal nor any of the other texts that have illuminated, challenged, sharpened, and confused my faith.  I do have Paradise Lost right in front of me, but I quoted my favorite Shakespeare a single day ago; there’s no way I’m going to quote my favorite poem today.  I’m not going to become the poetry-quoting guy, at least not every day of the week.

I have never adequately explained my faith, possibly not even to myself.  This is not for lack of trying; one of my sisters had a change of personal philosophy fairly early in life, and we’ve both discussed and explained each others’ worldviews ad nauseum, not because either of us wants to convert the other so much as we want to understand the other, and be understood.  (Also: I really like to argue.  This can’t be stated enough) My impression is that she tends to leave the conversation believing that I would understand her better if I just took a college chemistry class, while I leave the conversation believing that she would understand me better if she read some Plato.  She majored in Evolutionary Biology, I majored in English.  Yes, she’s smarter than me, but I’m not convinced that makes her right in this case.

I’ve actually found myself explaining my religious views to various girls I’ve been interested in, and I’m always a little paranoid that it’s a deal-breaker for some of them.  No one’s ever named my religion as a cause, but I’ve had a few girls who avoid me or break up with me for unspecified reasons, and it usually comes within a few days of the religion discussion.  I’ll take the time to point out here that I do NOT believe in creationism (or any faith-based substitute for science as a way of understanding the physical world), I do not believe that women should be subservient to men, I do not believe that disagreeing with me means you’re going to burn in Hell, and I do not believe my faith puts me in any sort of privileged position to judge the actions of others.  If sexual relations between gay people is a sin, it’s no more of a sin than sexual relations between straight people (Paul actually lumps all sex acts together and condemns them as all equally sinful; I feel that sex affords the opportunity for sin, but is not inherently sinful), and even if I did, I feel that none of that would be any of my business to begin with.

Defining the negatives is pretty easy- certain forms of Christianity have taken up unfavorable positions not particularly supported by the Bible or the doctrine of reason advocated by St. Augustine and St. Thomas Aquinas, and it’s easy to bat these aside and probably more necessary than it should be- in the past, you could assume that a Christian was a reasonable being, but these days the loudest Christians are often the least reasonable, and while there’s a Chesterton quote on the tip of my tongue explaining why this is a good thing, I’m not really sure it is.  So yeah, it’s easy to talk about what type of Christian I’m not, but the type of Christian I am is a whole other thorny issue.  For one thing, I am a Protestant, and you may not have noticed it from our approximately 4 billion sects, but Protestants are kind of obsessive about defining their particular flavor of Christianity, so if I went in for comprehensive analysis, I’d be in front of this computer all night.

The more difficult problem for me is that, quite frankly, I’m not the sort of Christian I’d like to tell you I am.  I’m pretty confident this is also a near-universal problem among the religious of all stripes, but it’s still something I’m sensitive to.  I wish I could tell you about how I involve myself in my community and volunteer to help the homeless and tithe 10% of my income to the church, but I fall short on every count, and several more I haven’t even detailed here.  The truth is, I’m generally uncomfortable around people and don’t make the best use of my time, and both of these small “quirks” have led to a situation where I do not help people and perhaps more people suffer than absolutely need to.  The previous situation is how I tend to think of sin, too, almost in utilitarian terms.  It makes mysteries like original sin more comprehensible, but maybe tends to make me wallow in guilt more than is strictly helpful.  I have a fantasy- a sad fantasy, sadder at least than the usual ones- that I could be an exemplar of my church and my faith, that my thoughts and actions would be able to represent, if not the best of Christianity, at least a collection of tendencies that lean in the direction of good.  It’s silly and conceited and ridiculous, but maybe the fact that I can consciously recognize that, and dismiss it, shows that the religious instruction I’ve received is at least capable of swatting aside the most ridiculous delusions.

Ultimately, everything comes down to that question of consciousness.  Whenever I hear of someone “losing” their faith, or describing their belief as something they just “had” and then “discovered” that they didn’t have it anymore, I feel like one of us is deeply misunderstanding the nature of faith, and I don’t think it’s me (I am still a little conceited). For me, faith is an act of consciousness- a decision to constantly and consciously reaffirm a belief that I have agreed to possess, because my reason tells me that it approaches the truth in some important way.  As long as I continue to reaffirm this belief, I will be in no danger of “losing” anything.